Last year we hosted a party for a bunch of friends and family. It was wonderful to have so many close friends and relatives having a good time together. Anyways, that isn’t what this post is about. Early on in the planning stages of the party it was decided that we should spit roast a pig. Not just any little pig though, we wanted to do a large one in the 80 to 90 lb range. That is a lot of meat to spin.

There were a few commercially available rotisseries to had for quiet a few $$$, as well as some rental ones that had a cost that was a bit easier to swallow. But where is the fun in that? I had some motors laying around and a desire to make something, so off I went. 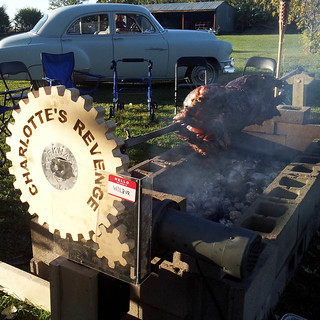 A preview of things to come

I started off by making some adapters and gears to allow two 280 N-m stepper motors to turn the main spit. Since I needed such a low rpm I figured I would be able to gear them down enough, and could add a counter weight to the spit, that would easily enable me to turn the 90 lbs of meat. This was all done on the false premise that my stepper motor drivers would be up to the task… more on that later. 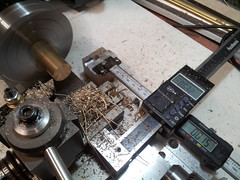 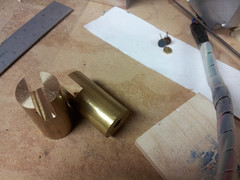 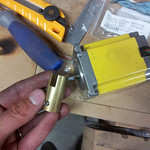 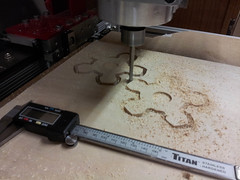 To help distribute the force on the large cog, and to prominently display the model # of my creation, I added a piece of aluminium plate. 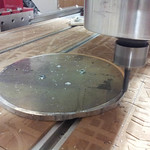 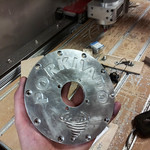 The cogs were made out of two sheets of 3/4″ Baltic birch plywood laminated together and the main cog featured “Charlotte’s Revenge” v-carved along the perimeter. 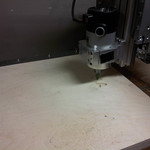 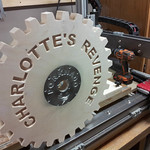 The supporting structure for the rotisserie was made out of wood, and the spit itself is a piece of steel supported on either end by some princess auto bearing blocks. The square tube used for the spit fits over some round hardened rod that then fits through the ball bearings, making it easy to load the spit on to the machine. 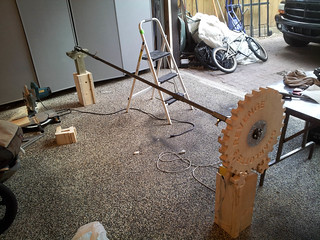 To keep the pig (or any other meat, or very large piece of tofu) from spinning there are two prongs welded on a slightly larger steel tube that fits over the main assembly. These smaller tubes also have a nut welded to them to allow a bolt to cinch down on to the spit and keep them from moving.

So as I said earlier, I had original planned to use some spare stepper motors to make the piggy turn. This quickly changed after I discovered the motor drivers themselves were not up to the task. They were correctly rated for the motors but when I had used them in the past I had never really been happy with their performance. Once everything was assembled I energized the motors and watched the gears turn. But that was about all I could do, even the slightest touch to the gears or spit would bring the rotisserie to a halt. No amount of counter weights could help this situation!

I calmly thought out how to solve this problem (OK, so I panicked since the party was quickly approaching). Bigger steppers? New motor driver? Different motor altogether? After looking at the prices of everything I quickly determined that a used motor was the only way to go; any more cost in to this project and I would have just been better off buying something or renting a unit for the weekend. I took to the internet and searched the classifieds and completely lucked out. DC Motor with gearbox – perfect for all your rotisserie needs! read the ad, or at least that is how it appeared in my head. There was a motor for sale in my city that was way overkill for my needs, which made it absolutely perfect, because at this point I wanted something that was guaranteed to work. 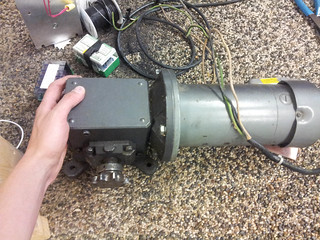 90 VDC 1/2 HP 1725 RPM rated motor with 40:1 gear reducer . This thing could hoist a 100 lb pig straight up off the ground, spinning a pig balanced on the spit would be no problem at all. As my concrete bag pig analog proved. 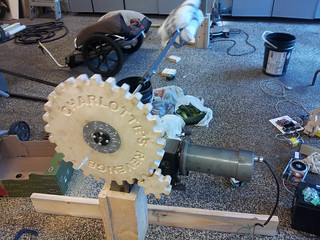 The roasting pit was constructed with some cinder blocks just set on the grass. 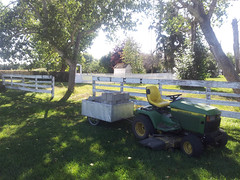 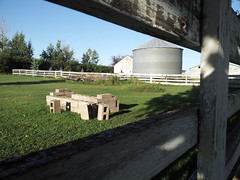 Add some charcoal, pig, and a solid 8 hours and you end up with one delicious pig. 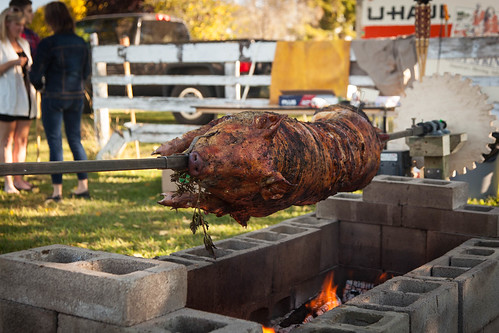